Lefthanders have a big influence on Opening Day Games and Rosters

We were hoping not to write about COVID-19 this year...

After a COVID free spring training, the virus struck MLB Opening Day.  The Washington Nationals three game series against the New York Mets was postponed because of ongoing COVID concerns within the Nationals team and organization.  The Nationals/Braves on Monday, April 5th was also postponed, but on Tuesday afternoon they finally opened the season.  The Nationals roster included 10 players who were late replacements for the 10 on the injured list because of COVID.

Since that first week, all other scheduled games had been played (other than postponements by bad weather). until this weekend when the Twins/Angels games on Saturday and Sunday were postponed due to a number of Twins personnel testing positive.  Let's hope that this gets better soon, and that "Game Postponed by COVID" will not be a regular occurrence in 2021.

In addition to Carlos Rodon, many other lefthanded pitchers are off to great starts in 2021.  As of April 15, Danny Duffy of the Royals, Steven Matz of the Blue Jays, Wade Miley of the Reds, Eduardo Rodriguez of the Red Sox, and Julio Urias of the Dodgers all won their first two starts, and Matthew Boyd of the Tigers and Clayton Kershaw of the Dodgers both have 2-1 records.  Lefty relief pitchers Caleb Baragar of the Giants and Josh Hader of the Brewers are each 2-0 with 1 save.  Jake McGee of the Giants has 6 saves and 1 win in 8 appearances, giving up just 1 hit and 0 runs in 7 innings.

Among lefthanded batters, Cedric Mullins of the Orioles is tied for 2nd in hits with 19 and Jake Cronenworth of the Padres is 5th with 17 hits.  Rafael Devers of the White Sox, Ryan McMahon of the Rockies and Tyler Naquin of the Reds are tied for 3rd with 5 home runs, with McMahon getting 3 in one game on April 6th.  Nate Lowe of the Rangers is 2nd in RBI with 15.  Brandon Nimmo of the Mets is 2nd with a batting average of .464 and Mullins is 4th with an average of .442.

Congratulations to Carlos Rodon, who joined the exclusive "No-Hit" Club on April 14th.

Established lefthanded batters and lefthanded pitchers in the prime of their careers,
older veteran lefthanders trying to stay productive and chasing career milestones,
and younger lefthanders working to establish their reputations as future stars.

Lefthanded Baseball will report on all of them as the 2021 season moves along.

Chicago Lefthander Carlos Rodon threw a no-hitter in the White Sox 8-0 win over the Indians on Wednesday night, coming within two outs of a perfect game before "settling" for the no-hitter.  It was the 307th no-hitter thrown in MLB history, and the 20th by the Chicago White Sox.  Rodon had thrown five shutout innings and won his first start of the year, and so far in 2021 he has given up just 2 hits and 3 walks in 14 innings with 16 strikeouts and a 0.00 Earned Run Average. 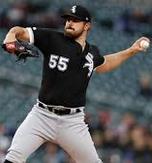