Pat Venditte pitched in the minor leagues for 8 years before making his major league debut in 2015.  He pitched in 26 games with Oakland that year, 15 more games in 2016, and then just 20 more MLB games over the next 4 years while shuffling back and forth between the majors and the minor leagues.  After 3 just appearances with Miami in 2020 he was granted his release, and he has not pitched professionally since that time.

Venditte pitched lefthanded (mostly against lefthanded batters) and pitched righthanded (mostly against righthanded batters), and had a specially made glove that he can wear on either his left hand or his right hand.  His unique talent forced baseball to create new rule that requires any ambidextrous pitcher to declare which hand he will pitch with so that any switch-hitter would remain batting from the same side throughout the entire at-bat.

A pitcher who could pitch both lefthanded or righthanded would have great value in MLB if he was good enough to get the job done.  Until Pat Venditte came along, it never seemed possible that someone might be able to do this.  While he was not quite good enough to get the job done consistently in MLB, he was the best ever at what he did in MILB.  His appearance in MLB and his efforts to get there have helped pave the way for the next young player who wants to become the best two-handed pitcher in baseball.​ 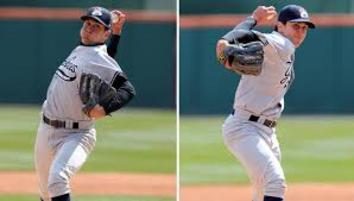 Other Switch-Pitchers who've played in the majors

​​​Prior to Venditte, there have not been any real Switch-Pitchers in the game.  Baseball history books mention four pitchers who pitched with both hands in Major League Baseball in the 1880’s and 1890’s…Tony Mullane, Elton Chamberlain, Larry Corcoran and George Wheeler.  Tony Mullane was a successful pitcher who won 284 games and lost 220 from 1881 to 1894.  He was a righthander who taught himself how to pitch lefthanded when he suffered an injury to his right arm.  After the injury healed he would sometimes alternate throwing right-handed and throwing left-handed in a game.  There is no record of how many games he won left-handed versus how many he won right-handed, or how often he might have thrown with his left hand.  Chamberlain, Corcoran and Wheeler were also right-handed pitchers who threw with their left hand on very rare occasions.

It was nearly 100 years before another major league pitcher pitched both right-handed and left-handed.  Greg A. Harris was a right-handed relief pitcher who pitched 15 years in the majors (from 1981 to 1995).  He would throw batting practice with both hands and he often campaigned for an opportunity to throw left-handed in a game, but his coaches would never let him.  It finally happened while pitching for the Montreal Expos on September 28, 1995.  Harris retired the first batter of the inning right-handed, then switched to pitching left-handed for the next two left-handed batters.  He walked the first batter, then got the next batter to ground out before switching back to his right hand to retire the last batter of the inning.