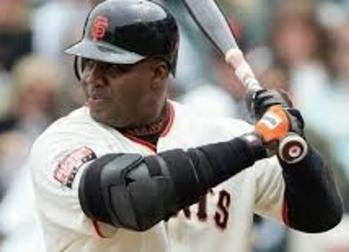 Bonds won the National League Most Valuable Player Award 7 times, 3 out of 4 years with Pittsburgh (1990, 1992 & 1993 and 4 times in a row with San Francisco (2001-2004) and he made the National League All-Star team 14 times. He accomplished all of this while setting the all-time record with 2558 walks (the next best is 2190) and shattering the all-time record for intentional walks with 688 (the next best is 307).  He lead the league in walks 12 years, as opposing pitchers and managers went out of their way to avoid letting Bonds beat them.

Bonds was also a very good outfielder who won the gold glove award for fielding excellence a total of  8 years.  He also had a strong and accurate lefthanded throwing arm, leading the league in outfield assists 6 times and finishing 6th all-time in outfield assists.  Bonds has been eligible for the Hall of Fame since 2013 , but has not yet been voted into the hall of fame because he was suspected use of performance enhancing drugs during the latter part of his career.