​Lefthanders in the
Baseball Hall of Fame 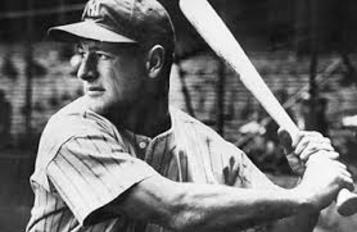 ​​Lou Gehrig  was a lefthanded throwing first-baseman who played 17 years in the majors (from 1923 to 1939), all with the New York Yankees.  While he was often overshadowed by Babe Ruth, Gehrig was a dominant player who finished his career with 534 doubles, 163 triples, 493 home runs, 1995 runs batted in (6th all time), and a .340 career batting average.

Gehrig was nicknamed “The Iron Horse” and was known for his durability.  He lead the league in games played 7 times and his record of playing in 2130 consecutive games stood for 56 years before it was broken by Cal Ripken.  Sadly and ironically, Gehrig’s career and his life came to a tragic ending while he was still in his prime as he suffered from a muscular disease that has become known as Lou Gehrigs’ disease.  He was elected into the Baseball Hall of Fame in 1936.