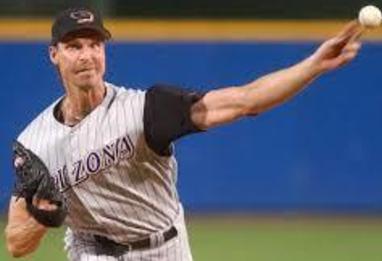 Other Great Lefthanded Pitchers during the same era (since 1990) were

Johnson finished his career with 4875 strikeouts (2nd all-time) and his average of 10.61 strikeouts per 9 inning is the best ever in baseball.  He lead the league in strikeouts 9 different seasons and struck out more than 300 batters 6 different times, including 4 consecutive years from 1999 to 2002 with Arizona.

Johnson won the AL Cy Young Award in 1995 with Seattle, and then won the NL Cy Young Award a record four years in a row from 1999-2002.  During those four dominating seasons, he won 81 games and lost only 27, and he struck out 1417 batters in 1028 innings. In his one World Series appearance in 2001, Johnson won three games and took the series MVP award.  Johnson was elected to the Baseball Hall of Fame in 2015.