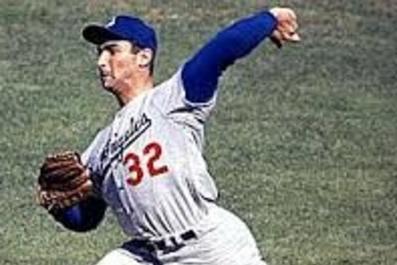 Koufax lead the league in ERA 5 consecutive years and in strikeout 4 times, and he pitched four no-hitters and one perfect game.  During his final four years before his early retirement due to chronic elbow paid, Koufax threw 89 complete games in 150 starts, with 1228 strikeouts in 1192 innings.  He won 97 games and lost only 27 for an amazing .851 winning percentage.

Koufax also started 7 games in 4 World Series, throwing 4 complete games and 2 shutouts, allowing only 6 earned runs in 57 innings for a 0.95 ERA.  He became the youngest player elected to the Baseball Hall of Fame, when he was inducted in 1972 at the age of 36.