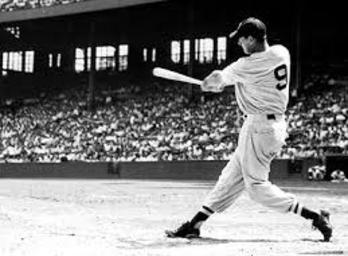 Willams won the American League batting title 6 times, including 1941 with a .406 average, which was the last time anyone has batted over .400 for a season.  He lead the league in runs scored 6 times, home runs 4 times, runs batted in 4 times, on base percentage 12 times, and slugging percentage 9 times.

Williams was voted Major League Player of the Year 5 times, and he won the American League Triple Crown twice.  His on-base percentage of .482 is the highest ever, and his slugging percentage of .634 is the 2nd highest ever.   He was elected into the Baseball Hall of Fame in 1966.