​​Ty Cobb was a righthanded throwing outfielder who played 24 years in the majors (from 1905 to 1928), including 22 with the Detroit Tigers and the last 2 with the Philadelphia Athletics.  His .366 career batting average is the highest ever and he lead the American League in batting 12 times, including 1911 with a .420 average, and 1912 with a .409 average.  His 4189 career hits were the most ever until Pete Rose later broke his record, and he lead the league in hits 8 different seasons.

Cobb was known as “The Georgia Peach” and while he was respected as one of the best players of his time, he was not very well liked.  His temperament and irritating style of play lead him to fights with umpires, fans, teammates, managers, and opponents.  He was elected into the Baseball Hall of Fame in 1936. 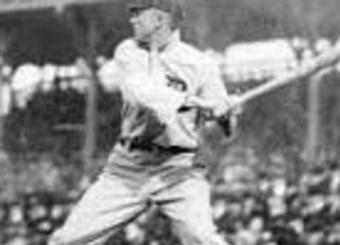