Griffey lead the American League in home runs 4 times and made the All-Star Team 13 times,  He was also a great center-fielder with a powerful throwing arm, winning the Gold Glove Award for fielding excellence ten consecutive years from 1990 to 1999.   He was elected to the Baseball Hall of Fame in 2016.​​​​​ 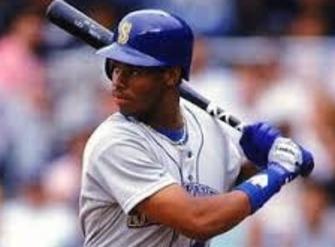